“LIFE Viva Grass” team has collected good examples of viable grassland management from Baltic States, other parts of Europe and the world.

What? Piper Hole farm- five workers (all family members), 200 ha of land of which 30 ha are meadows, in total 400 animals (goats, sheep, pigs and cattle), including 100 goats for milk production
Where? United Kingdom

The goal of the farm today is not the get the highest amount of production outputs, but to get the best quality products (sheep meat and goat milk).

The main income of the farm comes from selling lamb meat and goat milk soap as well as from the agri-environmental support scheme for meadow management. For animal feed only grass and haylage (dry silage) is used.

According to the calculations of the farmer, the profit from keeping goats is ca. three times higher than from sheep. The daily milk production is 3 liters per goat. The fat content of the milk is 4,5-5%, for some special breeds up to 9%. They sell soap at the road, in the local market and in farmer’s markets. Extra milk is used for feeding lambs and calves. They cannot sell it for food production because of special requirements needed for that.

Piper Hole produces mainly organically, but does not hold a certificate of an organic producer.

What? Producing hay pellets for pig food and heating
Where? Halbenrain in Austria

In 2008-2011 a project was carried out to investigate the possibilities to produce heating pellets from hay. Decline in cattle farming caused permanent reduction in the area of meadows in region. Now it is mostly pig farming and corn growing in that region.

The pelleting machine had to be invented and built from different parts because there was no ready-made solution available on the market. As a result of practical testing it turned out that with pellets made 100% from hay it was difficult to reach the acceptable limits for exhaust emissions. An ideal mix for heating pellets turned out to be 80-90% corn cubs and 10-20% hay.

It was discovered that grass pellets were a good raw fibre material to put into the feed for pigs who really like it, also it is cheaper than imported raw fibre pellets.

Ca 700 kg of pellets can be produced in an hour and the production costs are 190-200€/t (e.g imported raw fibre pellets cost min 320€/t, wood pellets for heating cost around 260€/t). Currently the pelleting factory produces 50-70 t of heating pellets and 700 t of pellets for pig fodder per year.

The association “Heu & Pellets” belongs to 7 farmers who are planning to build a new pelleting machine which will be able to produce 5 t of pellets per hour.

What? Production of hay pellets for pets
Where? Latvia 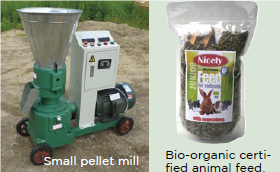 The company was founded in 2009 and produces organic hay pellets, mainly meant for rodents’ fodder. Since 2013 the company is certified producer of organic fodder. Pellets are easy to store and transport. Hay from organic meadows contains natural vitamins which gives it high value. Individual recipes are developed for different pets at different ages. Products are sold to pet shops in Latvia but also exported abroad (e.g. to Russia, Italy).

The hay that is not suitable for feed production can be pelleted for fuel. The ash can be used for fertilization of arable land. Lignin is not a problem but even a must for forage pellets as it makes pellets compact.

What? A one-man biogas plant
Where? Bavaria in Germany

The plant was established in 2004 after several years of testing dry fermentation technology (does not need any additional liquid and moisture content is less than 75%) for producing biogas from biomass. The plant is producing about 550 kWh per day of green electricity that is bought by a local electricity supplier. The facility uses grass and crop remains assembled from surrounding agricultural land.

Biomass is kept wet permanently with the help of the so-called percolate at a constant temperature of 38°C. The batch duration is about 4 weeks. After that about 15% of the well-fermented biomass is removed and replaced with fresh substrate.

To ensure an uninterrupted supply to the end-users during changing of the batches, at least two fermenters need to be in place and operational. The fermenters are in principle quadrangular reservoirs. Therefore, no separate gas storage is needed. Part of the heat will be needed to heat the fermenter, the rest can be used for heating the living rooms, for drying etc.

The owner of the plant is also offering services related to biogas plants, such as advice, planning and construction of a functional system with commissioning and support.

What? Cheese factory
Where? Goričko Nature Park in Slovenia 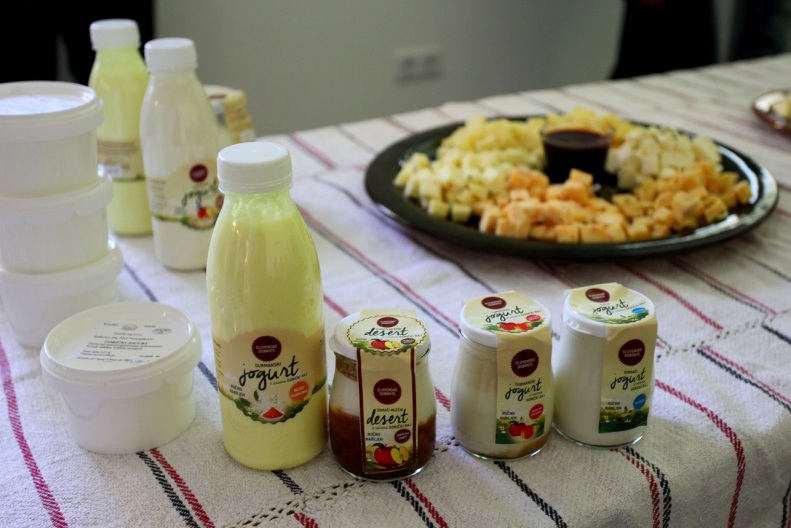 The aim is preserving and encouraging  livestock farms in Nature park Goričko to maintain the tradition of grazing and feeding the animals with hay.

In 2010, in the frame of the European Territorial Cooperation Programme Slovenia-Hungary project the first farm cheese factory was established in Goričko in the former fire house in.

The equipment of the factory is owed by the Public Institute Nature Park Goričko and conceded to the local community for substantive dairy production. Locals can use the equipment with the condition to mow grasslands in the protected area. The dairy factory collects cow, sheep and goat milk from surrounding villages.

The cheese factory offers several types of dairy products, including soft cheeses made from sheep, goat and cow milk, semi-hard cheeses, yogurt, sour cream, cottage cheese, albumin curd and whey. They sell their products locally, but also deliver products to shopping centres in the biggest cities in the region and also the capital Ljubljana.

What? Co-operation network for landscape management
Where? Neumarkt district in Germany 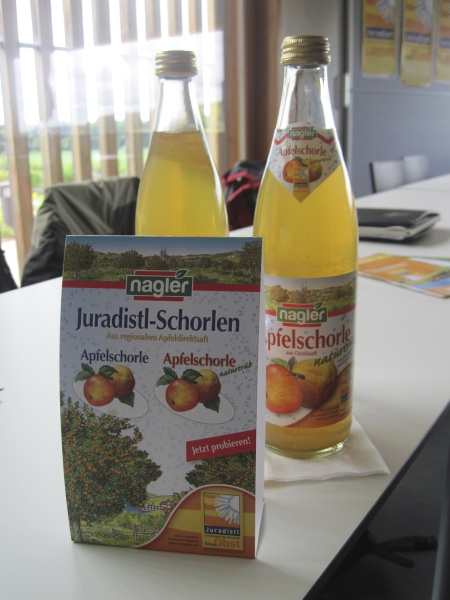 In Neumarkt district in Germany, landscape management and grassland maintenance are the matter of different stakeholders that are members of Management Association Neumarkt (Landschaftspflegeverband Neumarkt).  In addition to traditional landscape management the association is dealing with protection of species and habitats, river basin management, development and marketing of landscape-related products, establishment of the thematic hiking trails in the landscape, offering guided nature tours and different environmental education programmes. It was established in 1995 and since then the association has built up a network of partners and stakeholders consisting of active local citizens, nature conservation associations, farmers and shepherds, landowners, mayors and municipal councils, authorities, tourism representatives, restaurants, agricultural associations schools and kindergartens.

The work of the Association in financed by membership fees, sponsors and through different projects.”

„Bjarteyjarsandur”is a great example of multi-functional farm. Owners keep sheep, goats, horses and also provide tourism services, sell various local products. The income of the farm can be divided in more or less equal parts of income from farming and it’s production (including State support); and income from tourism. Grasslands in Iceland is maintained by local farmers who cooperate with nature conservationists and scientists. In order to be able to keep their sheep in grasslands and to get payments from the government, farmers are obliged not to overgraze grasslands and to restore the ones that are damaged mostly. 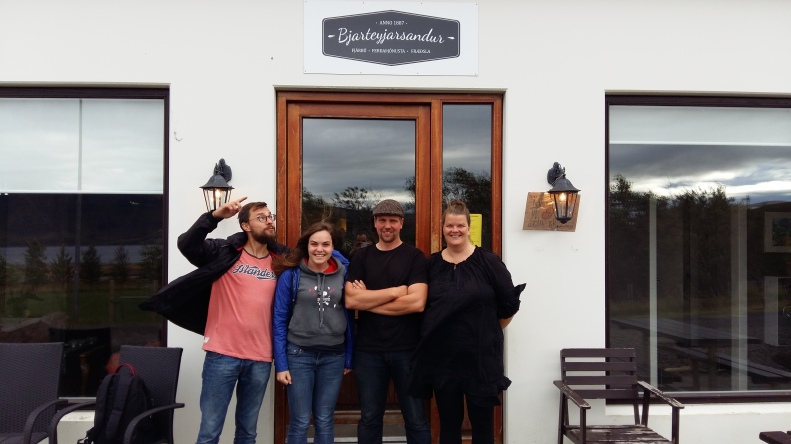 Nature tourism was started to be developed from activities for local school children. Tourism is well tuned with sheep farming in Iceland since summer if the most intensive period for tourism and in winter the attention should be taken to the sheep farming. When the farm became a tourism service provider, the most drastic change happened in owner’s lives – now they suppose to be available 24/7. 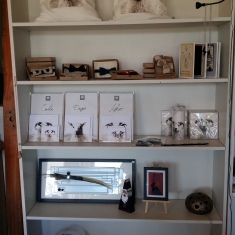 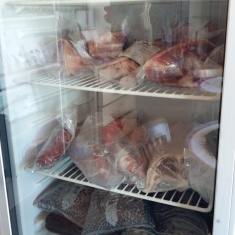 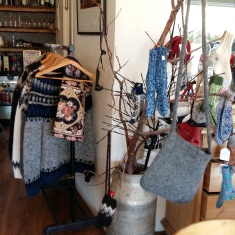 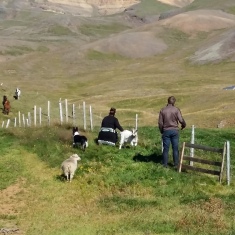 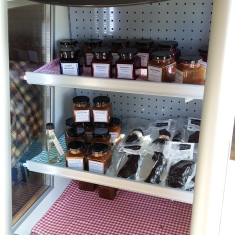 The project “Integrated planning tool to ensure viability of grasslands” (LIFE Viva Grass) No. LIFE13 ENV/LT/000189 is co-financed by the EU LIFE+ Programme, Ministry of Environment of the Republic of Lithuania, Administration of Latvian Environmental Protection Fund, Estonian Environmental Investment Centre and the project partners.
© 2020