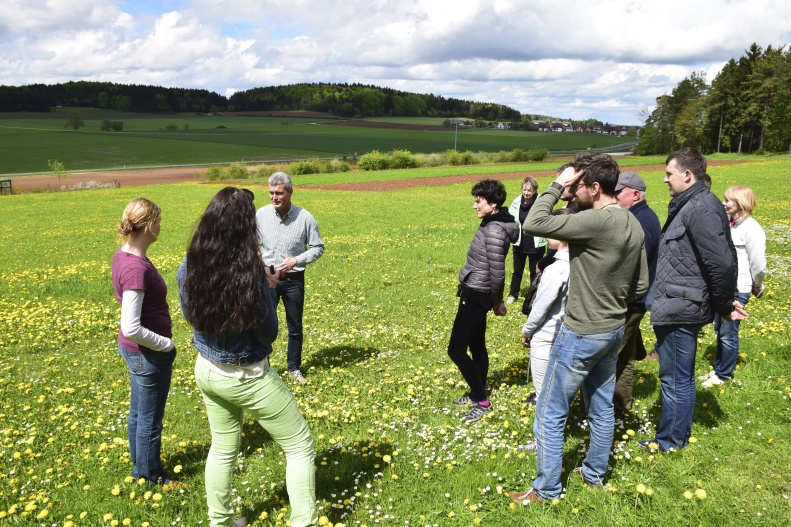 During the first day a multinational study tour group visited “Haus am Habsberg”, which acts as a centre for education and traditional agri-culture. It was established by LPV-Neumarkt organization. The centre representatives shared a modern approach on traditional farming and additional services that are offered to local communities and tourists: traditional cuisine workshops, gardening seminars, other children educations and private lectures. The very first object of the study tour programme provided a great example how to develop regional branding based on sustainable grassland management. The local “Juradistl” product brand was introduced as the example of strong local farmers interest to position their products as a tool for nature conservation in the region. The traditional shepherding is cherished in the area by active involvement of local farmers. That adds conservational (grassland grazing) and economic value to regional lamb meat production.

During the second day of the study tour the group visited the Seeon biogas plant in the region of Bavaria. The biogas facility was established instead of previously operating dairy farm. Run by one person it is now producing about 550 000 kW*h/day green electricity that is bought by local electricity supplier. The facility uses grass and crop remains assembled from surrounding agri-cultural land. It is an advanced business favorable to regional grassland management.

The programme continued with a third day visit to the grass biomass pelleting facility in Halbenrain, Austria. In recent times cattle in Styria region were taken away from grasslands into sheds. Grasslands were sowed and corn crops were grown instead of them. Keeping grasslands was not economically sufficient anymore for the farmers. So a project named “Heupellets” was started to save the remaining grasslands and provide farmers with a solution where they could process the biomass. A pelleting factory was established in the project and now it still works after the ending of the project. It is being managed by a team of seven farmers. They make pellets mainly out of grass, maize, corn cobs or a mixture of it. Also they discovered that grass pellets are a good raw fiber material to put into the food for pigs and they really like it. Last year they produced 700 t of pellets for fodder. Now they are building a new pelleting machine which will be able to produce 5 t/h of pellets. Farmers can sell the biomass to the factory or bring it to them and pay for the pellet making. Some of the farmers even started to ressed their fields with grasslands. Afterwards the study tour group visited several land holdings in the state-defined grassland conservation area that are marginal land parcels inserted into the wider range agricultural land area.

During the fourth day the study visit group visited Goricko Nature Park. Two excursions to wet and dry grasslands were organized to observe their large biodiversity and to discuss two types of applicable management methods: mowing and grazing, as well the biomass usage opportunities. Goricko Nature Park collaborates with local composting facility and assigns all wet-mowed grass biomass for organic compost production. The group visited a dairy factory, which was equipped by the park administration using the EU funding and conceded to the local community for the substantive dairy production. The dairy factory now collects cow, sheep and goat milk from surrounding villages and delivers their products to shopping centers in the biggest cities in the region and also the capital Ljubljana. The group also visited the visitors’ centre of the park, which is established in the castle Grad with a large exhibition about the areal grassland biodiversity and conservational measures.

The fifth day of the study tour was used for traveling through picturesque alpine region back to Munich airport for the study tour group to end the cognitive visit.

During the study tour the group met the solutions applied in the alpine region countries on grassland management. The protected area specialists and municipality representatives got the possibility to get sight of innovative ecosystem service practices and modern grass biomass usage facilities. The group participated in discussions about local communities involvement into regional grassland management solutions, innovative efforts to use grassland produced biomass and development of nature conservation based tourism activities. Combining the elements of traditional grassland maintenance, engaging ecosystem service development and operation of biomass could cause an integrated boost for the regional development and motivation for local authorities to gain benefits but also to conserve valuable regional landscape.

The study tour served as positive evaluation of project progress and enabled to gather useful basis of information for further developments in the Baltic region.