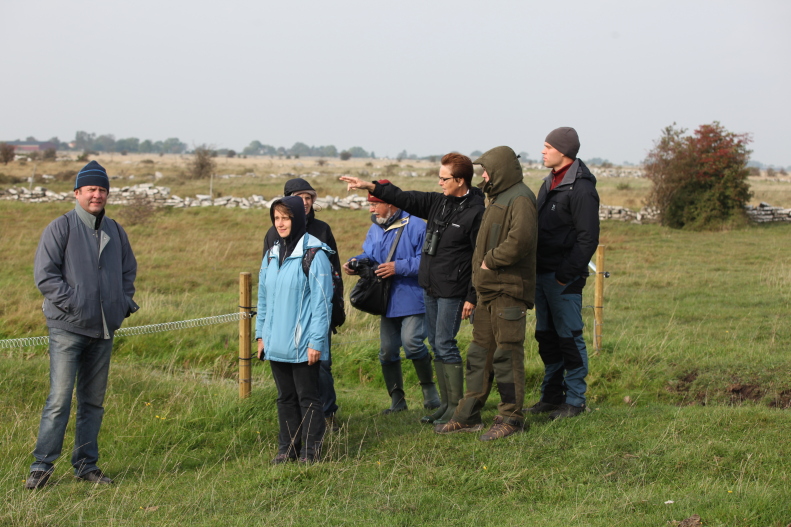 September 22-26, 2014. Project partners went for a 4 days-long study visit to Sweden to learn how management of alvars, coastal meadows and wooded meadows is organized in Sweden; to visit well-managed grasslands in Öland and Småland and meet people managing these areas; to share experience with and introduce LIFE Viva Grass project to Kalmar County Administration.

Meeting in Kalmar County Administration Board

Kalmar County Administration Board briefly introduced the Kalmar County and the role of the Kalmar County Administration Board, gave an overview on protected areas and grassland-related nature values; introduced environmental supports available for natural pastures and meadows and their use. Later, Project representative M.Kuris gave a brief introduction  to LIFE Viva Grass project – its aims and activities. It created a good ground for a discussion about Farmers in Öland, land management, sheep grazing and problems the locals encounter.

Stora Alvaret (the Great Alvar) is a limestone barren plain on the island of Öland. Because of the thin soil mantle and high pH levels, a great assortment of vegetation is found including numerous rare species. Stora Alvaret has been designated as a World Heritage Site by UNESCO due to its extraordinary biodiversity and prehistory. The area of this formation exceeds 260 km², making it the largest such expanse in Europe and comprising over one fourth of the land area of the island. Stora Alvaret is a dagger shaped expanse almost 40 kilometres long and about 10 kilometres at the widest north end.

Project team visited Stora Alvaret in Skarpa Alby and the guide Helena Lager gave them an overview of management of different types of alvar habitats and introduced some rare/endemic species (e.g. the Öland Wormwood Artemisia oelandica, Helianthemum oelandicum, the Oland Bedstraw Galium oelandicum). Some insights came out during the visit:

Gråborg is the biggest ancient ring fort on Öland dating back to AD 500. When the Royal Swedish Academy of Letters, History and Antiquities bought this area in 1945, most of fields were completely overgrown. Since then, the cultivated land has been brought back to how it used to look and the old fields have been restored. The areas which have been not cultivated are used as meadows and pastures. The area is managed by a farmer (Börje Karlsson) paid by the Academy and also using the agricultural/environmental supports. The area is open for visitors and there is also a small shop where local products are sold. Currently the ring fort is used as pasture for Helsingland sheep which is an endangered local breed.

Visit to the Station Linné – a centre for research, popular science activities, culture and tourism related to sustainable development

The head of the Station Linné, Dave Karlsson introduced the activities and research projects carried out in the station.

The Station Linné (www.stationlinne.se) is a center for research, popular science activities, culture and tourism related to sustainable development. It was founded in 1963 as the Uppsala University Ecological Research Station. Since July 2008 it is called the Station Linné and managed by an independent society (Föreningen Station Linné) and its privatly owned company Porten till Alvaret AB. Every year 75-100 scientists and their assistants visit the station, half of them from Sweden, half from other countries (10-15 countries each year).

The biggest scientific project is the Swedish Malaise Trap Project funded by the Swedish Species Information Centre (ArtDatabanken). It aims to provide species determinations for all the 80 million insect specimens obtained from Malaise traps sampling at a wide range of landscapes and habitats during 2003-2006. There were 75 traps at 54 localities in Sweden, which were emptied twice in a month, so there are almost 2000 samples containing millions of insects. More than 100 experts (including an Estonian expert) are involved in sorting the samples. To date, 2/3 of the samples are sorted into major groups and 1400 new species for Sweden are already known, half of which are also new for the world. It is planned to use this knowledge to build the Swedish insect fauna archive. The project budget is 2 Million SEK per year + support from different authorities in Sweden (the total budget of the Station is 4-5 Million SEK, 80-90% of which is used for the insects’ project).

Eje Rosen gave an overview on the history of the research station and different experiments carried out by Eje Rosen in his permanent sampling plots since 1969.

The experiment on impact of trampling on lichens and mosses proved that 100 times walking leaves a clear path that stays for 10-15 years. There was also an experiment on impact of removal of junipers based on which it was concluded that crushing of junipers is not good because juniper does not decay, but also pulling out is not recommended because it leaves holes where animals can hurt themselves. An experiment with artificial sheep and cow skins was carried out to find out how many seeds a sheep or cow skin can collect. A GPS was installed to a cow to see where it goes and where and when it eats. Even the Swedish king visited the research station to see the experiments. Monitoring of heather squares showed that the heather disappears in dry years but comes back when conditions are favourable again.

Rosen also showed pictures about public activities of the research station, such as excursions for children, trainings for guides and public events such as Middle age day (an initiative of local people). He also introduced the natural and cultural values of the Northern Öland that we did not manage to visit during the limited time of our study tour.

Visiting coastal meadows, the Visitor Centre (Naturum) and the Crown Estate in Ottenby

Study visit participants visited Visitor Centre (Naturum) in Ottenby, managed by the Swedish Ornithological Society, and the coastal meadows nearby. The guide Susanne Forslund introduced the management of coastal meadows and the LIFE Project „Rehabilitation of Baltic Coastal Lagoon Habitat Complex (LIFE BaltCoast 2005-2012) in frame of which the green toads were reintroduced in Ottenby and also some management actions for coastal habitats were carried out (closing ditches, digging ponds).

The farmer Andreas Wiström introduced the Wiströms enterprise managing the Ottenby Crown Estate. The Crown Estate is bounded to the north by a stone wall that goes straight over the entire island, from Kalmarsund to the Baltic Sea. The wall is known as Karl X Gustav’s wall, and nearly all the land south of the wall belongs to the Crown. The estate was established by Gustav Vasa in the middle of the 16th century to supply the king and his court with provisions.

Today Ottenby Crown Estate is one of the Sweden’s largest dairy farms that is managed by the Wiström family. It has about 500 dairy cows, 400 beef cattle and 200 sheep. The farm has 1400 ha of grasslands of which 1000 ha is grazed by the animals of this farm and the rest is rented out. There are 4 persons dealing with milking cows and 3 with sheep, beef cattle, machinery and fodder. Additionally there are 5 persons in the other farm in Öland. The enterprise is run by 3 brothers. They started from zero 25 years ago. They are managing alvars and coastal meadows. There is 45 ha of mown meadows. Mowing is starting on 15-20 June, it is done for nature conservation purposes (not needed for fodder). The hay is mixed with other grass and fed to the beef cattle. The yearly turnover of the farm is 40 Million SEK.

The income comes from subsidies (SAP, environmental measures for grasslands (most of it is the best class), mowing support – in total more than 1 Million SEK per year), selling the milk (30 l/day, 10 000 l/year. 30 cents per liter). Grazing in forest is also supported but no SAP is paid for that land. The beef cattle is Aberdeen Angus. 1 December-30 April the beef cattle is kept inside, the rest of time outside without additional feeding. Milking cows go inside on 15 October.

Once per 4 years pesticides are used on the fields. The beef cattle gets also grain (the third harvest without pesticides).

The farm manages also the tourism infrastructure (CAB pays for it). There are 250 000 tourists per year in Öland.

The nature conservation department of Kalmar CAB, Ottenby bird station, the farmer (Wickström enterprise) and the land owner (state authority) meet at least once a year to discuss the issues related to the Crown Estate area. These meetings started 6-7 years ago.

Public tenders are organised for renting the Crown Estate, the locals are not preferred.

Introduction of Öland as a UNESCO World Heritage Site

In 2000, the agricultural landscape of Southern Öland was designated as a UNESCO World Heritage Site. The southern part of Öland is dominated by a vast limestone plateau. Human beings have lived here for some five thousand years and adapted their way of life to the physical constraints of the island. As a consequence, the landscape is unique, with abundant evidence of continuous human settlement from prehistoric times to the present day.

Pruning or pollarding – cutting branches of lime and ash trees on wooded meadows every 1 or 2-3 or 4-7 years. In Bråbygden area there are ca 4000 trees with cut branches. The cut branches were fed to sheep. This activity created the so-called Harry Potter trees that are still maintained in the very old wooded meadows in this area.

Anne Harrysson told about the history and current life of the area and showed the traditional landscape with wooded meadows, pollarded trees, wooden and stone fences, tar burning holes, wolf traps. Since the early Middle Ages, people in Bråbygden area have been dealing with farming, livestock breeding but also with burning tar and charcoal, selling timber. Nowadays the fields are used mostly for haymaking because the wild boars rout out everything else. The fenced areas were used as an archaic milking robot.

Today, more than 250 inhabitants live in Bråbo (the centre of Bråbygden), the average age is about 35. There are five full-time farmers and a dozen hobby farmers to ensure that the landscape is kept open. For development of the area, an association, the Bråbygdens Intresseförening was founded in 1993 that has more than 300 members.

The main problems of farmers are related to the economic side of farming – low income from farming (e.g. low price of meat) but strict requirements (e.g. animal welfare requirements).

We visited 3 different farmers in the area:

You can find more pictures from the study tour in the gallery.