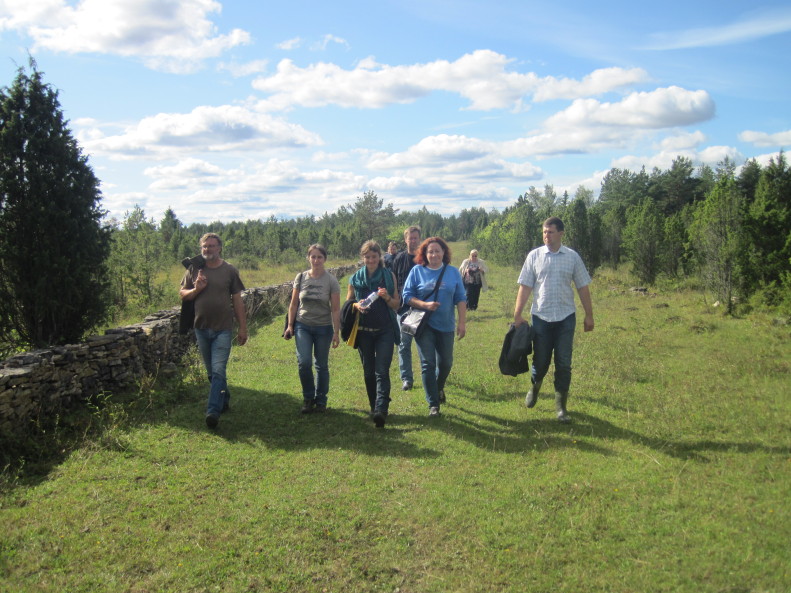 September 9-11, 2015: participants from the three Baltic States attended Baltic study tour in Latvia-Estonia. This study visit aimed to give a chance for partners to visit each other’s case study areas and gather experience on economically viable models for grassland management and the usage of grassland biomass. 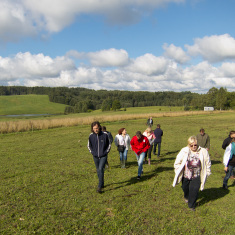 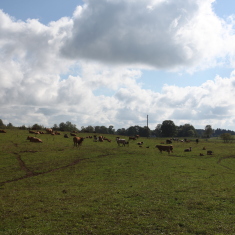 During the first day, the study tour group firstly visited the Vaive parish and the farm “Vidus Krastini” of Valda Zaļaiskalna who also works as the head of Vaive parish administration. The farm produces organic beef. The neighboring farm “Lejas Krastiņi”, which belongs to her sister, produces milk. Both farms cooperate with each other in using grass for fodder. In addition to regular grassland grazing, cattle help to manage 11 ha of High nature value grasslands. 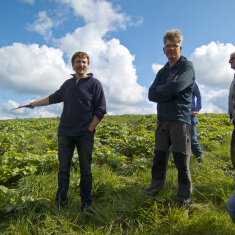 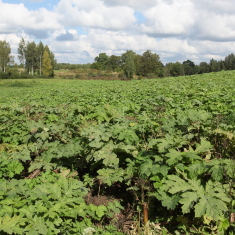 The second place to visit was a Giant Hogweed invasion area, which is also chosen as a grassland restoration site in the LIFE Viva Grass project. During the project activities, this area, ca 7 ha in size, will be covered by plastic membrane to experiment if such kind of technique is efficient to eliminate the invasive species. A thing that maybe interesting for the project content is that in Latvia land owners are obliged to fight the Giant Hogweed on their lands and if they do not show effort, they can get a fine of 270 euros/ha. Municipalities can reduce land property taxes, if the property is invaded by the Hogweed and the owner is active in elimination, e.g. the reduction could reach even 90% in Sigulda municipality. 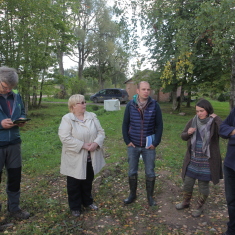 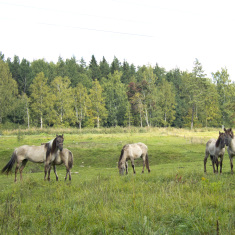 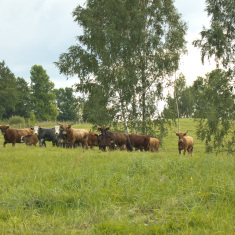 The third place visited was a farm called “Gobukalni” owned by environmental filmmaker Kaspars Goba. He is managing ca 60 ha of grasslands with Scottish Highland cattle and Konik Polski horses. He expects to restore these grasslands in a good biodiversity quality and receive additional payments for biodiversity support. Monitoring of grassland species shows a constant improvement of biodiversity. The cattle are grazing also in woodland, whereas in Lithuania it is restricted. In Estonia grazing is done in wooded meadows (habitat type 6530*) and wooded pastures (9070). Wooded pastures are in principle a forest habitat type. Also, the cattle are shot on spot in the farm and not brought for killing to the slaughter house, to avoid stress for the cattle. 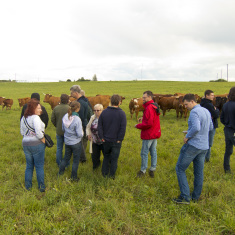 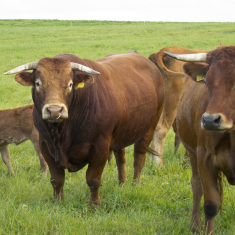 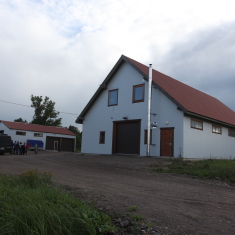 After this, the project site “Sovites” farm was visited where restoration work on grasslands will take place in the near future. The farm keeps ca 50 Limousin breed beef cattle, which uses grass from 80 ha of land. The farm is located on former arable land, and the owner would like to restore it to a semi-natural grassland state 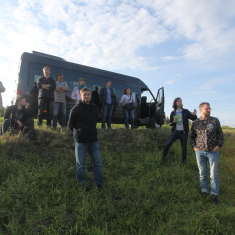 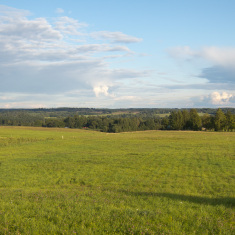 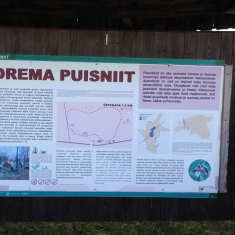 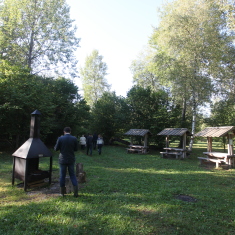 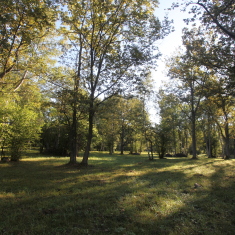 On the second day, the participants firstly visited the Nedrema wooded meadow. The meadow is 80 ha in size. It is being restored by Urmas Vahur, one of the partners of the project. Voluntary work was mostly used to restore this wooded meadow. Urmas plans to restore more of the meadow in the near future. 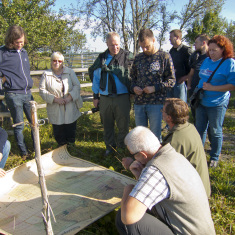 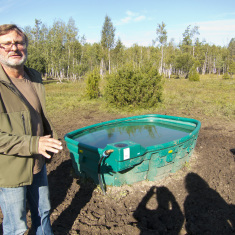 The second site, the project case study area, called Kurese nature farm was visited. It is owned by Urmas Vahur. Kurese is an abandoned village, unique for its cultural and nature heritage. Urmas is restoring and managing alvars in this area with rented cattle. Through project activities, a water system was installed in the area so he could enlarge the number of the cattle to manage more territories. 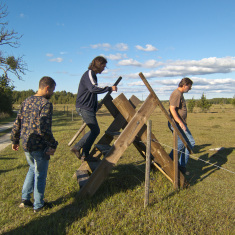 After the farm, Matsalu National Park in Lääne County project area was visited, where representatives of the Environmental Board gave an excursion into the park and introduced management of coastal meadows and floodplain meadows. Some of the biomass from the meadows is used as biofuel to heat the town of Lihula. 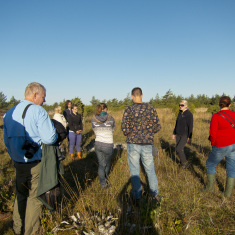 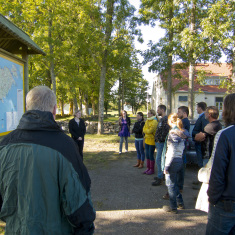 The third day started in Saaremaa island, where the participants firstly visited an alvar restoration site of the LIFE project “Life to alvars”. The project manager Annely Esko introduced the project activities and restoration techniques. Over 2500 ha of alvars are being cleared from trees and junipers and then grazed with animals which are owned by local farmers. Another stop was in Vilsandi National Park, in Loona Manor, where Maarika Toomel and Katrin Trumann presented the manor as the Vilsandi NP visitors centre. Maarika also gave a small lecture about the need to preserve the nature and the concept of ecotourism. She has a lot of knowledge in this sector and provided examples how nature can have an important role in ecotourism if it is wisely used. 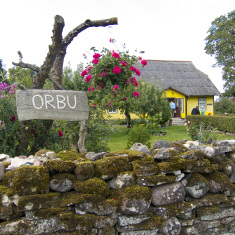 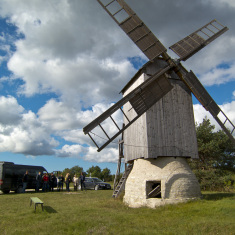 The last visited place was Leedri village in Lümanda area, which this year was awarded with the village of the year award in Estonia. Leedri village is a very good example how traditions and communities can thrive in our modern day world. The participants visited one farm in the village where four local women started a business and make juniper syrup. That is also an alternative way how to manage alvars – to cut juniper shoots for the syrup. The founder of the juniper syrup farm gave a brief introduction on how the syrup is made and where it is marketed. She also talked about the importance of creating jobs for the community, which makes a good pre-condition for a lively village, which Leedri is.

More pictures from the study tour